Well, I'm managing to post this on time because Corey and I busted our butts in order to make it all the way home last night. To be fair, Corey busted his butt in terms of driving (we were doing a very even split all day, but when it came to the final push I had to bow out) and I busted my butt in terms of trying not to go insane with discomfort in the passenger seat in the last two hours of a 15 hour drive. I'd say we put in equal effort really.

So, we're home, finally, and with two full days to recuperate before going back to work. Well, ok, Corey gets two days to recuperate, and I have to get back to work today, but whatever we still get to take it slow and hang out a bit without being in the car, so we're calling it a weekend.

The question you're all probably dying to have answered is: how did a two week road trip in the third trimester of pregnancy actually go?

I mean look, it was still weeks 34 and 35 of pregnancy, so it was bound to have its downsides wasn't it? Just because I was traveling doesn't mean I got to leave behind pregnancy or any of the inconveniences that come with it. And I've never been pregnant before so I have no baseline for what weeks 34 and 35 would have been like without sitting in a car for hours at a time, sleeping on a thermarest in a tent, or staying in unfamiliar beds for two weeks. However, I do have a strong baseline for what those things are like outside of weeks 34 and 35 of pregnancy and I can tell you that they are not made in any way easier or more enjoyable by being pregnant. That said, they were still pretty fun.

Keep in mind I'm the kind of person who LOVES road trips when I'm not pregnant. If you were to walk up to non-pregnant me and say, "Hey, Virginia, I'm thinking about going on the road for a month, driving between 6 and 16 hours a day, and camping/sleeping in the car on my way across north america and I need a buddy to do it." I would reply, "Well, you have come to the right place, my friend. I am precisely the buddy for that kind of adventure." I might jump into your arms and hug you as well. I seriously love road trips and always have. My mom started me on them when I was young, and for many years it was a thing we did together. When I got old enough it was a thing I often did solo. I have driven across the US by myself a handful of times. I have been in all 48 contiguous states largely thanks to my road trips. I have traversed, alone and with friends/family, the east coast from north to south and back again. The west coast from south to north. Gone from coast to coast east to west and west to east, and many shorter trips in between. I've driven from just north of the Mexico border all the way into Canada. And from various spots in the US down into Mexico. I have now gone from Winnipeg to Toronto and back twice. I really desperately want to go coast to coast through Canada sometime in the not too distant future.

I think you get the idea. It's safe to say I love road trips.

So, I didn't think I was going to suddenly hate them while pregnant, and I was right. I was so happy to be road tripping, something that is a big piece of my identity pre-deciding to have a kid, that I was able to blissfully ignore most of the small discomforts that road tripping while pregnant brings with it.

But you folks are here precisely because of this whole pregnancy business, so while I may have ignored them or suppressed them to the best of my ability in order to do a thing that I love, I will still enumerate them here so that you don't get the wrong idea about smooth sailing through late pregnancy symptoms etc.

I could give you a play by play of the whole trip, but that would take forever, and I have bunch of work that I need to do, and you probably have places you need to be, so we'll just do two lists; one of lowlights, one of highlights, throw in a few pictures from the whole thing and call it a blog post. Shall we?

Lowlights (aka when pregnancy got the best of me on this trip):

Ok, that's enough whinging about how my perfectly healthy pregnancy with minimal negative symptoms made my fabulous road trip harder than normal. Here are the highlights, along with some photos, so we can get back to the point where I said the whole thing was pretty good all in all. Because it really was a good trip and I don't want my attempt at keeping honest about pregnancy symptoms to make anyone think I didn't have a great time, or that I didn't appreciate just how lucky I was to be able to make the trip at all.

So here go the highlights - some are pretty general, others are very specific: 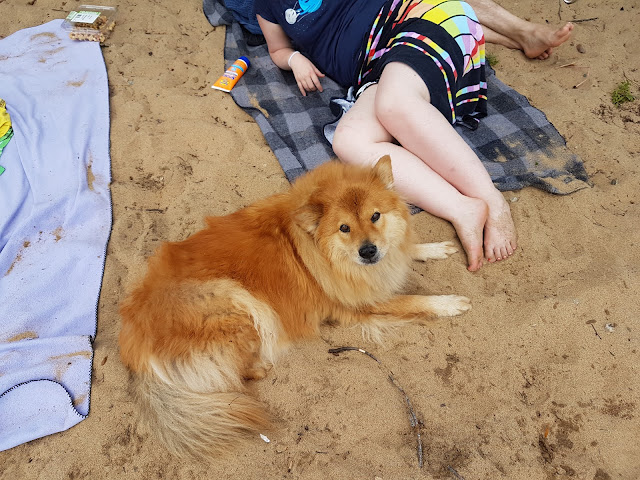 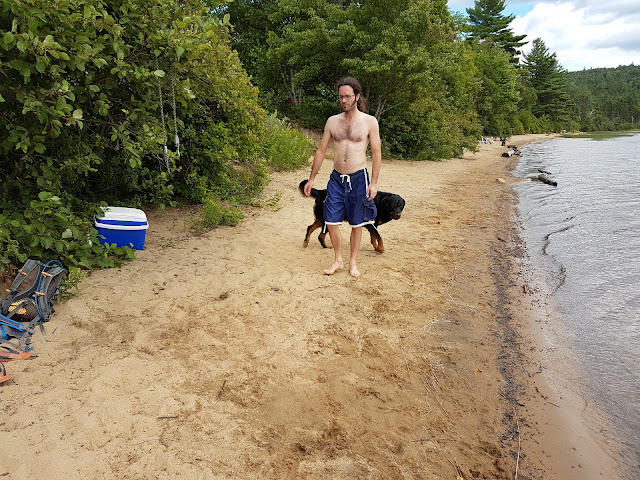 I do, however have a series of awesome photos of a beach day in Toronto with our good friends who are also 35 weeks along with their first baby. 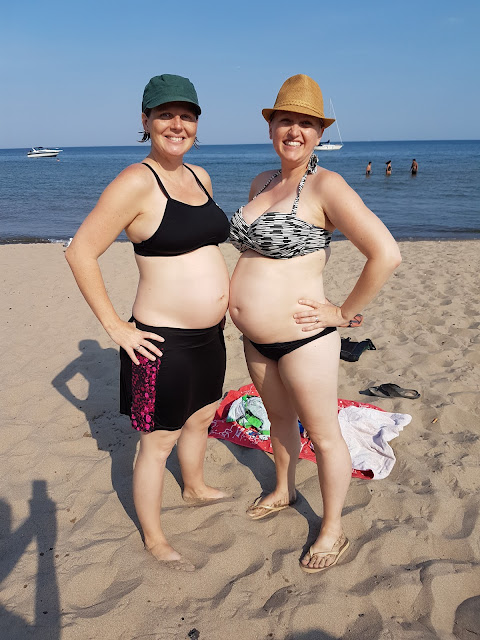 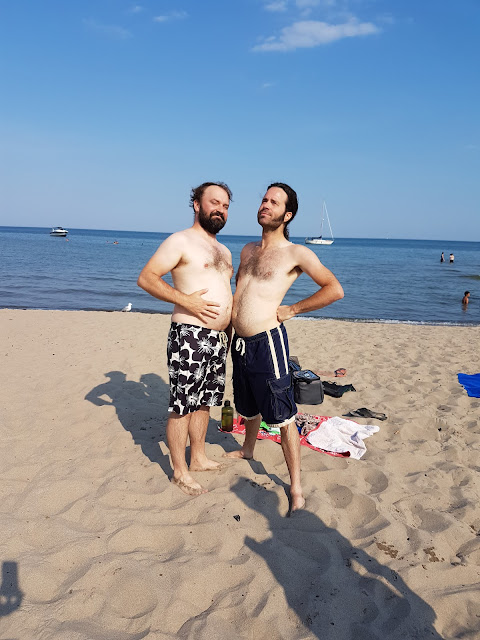 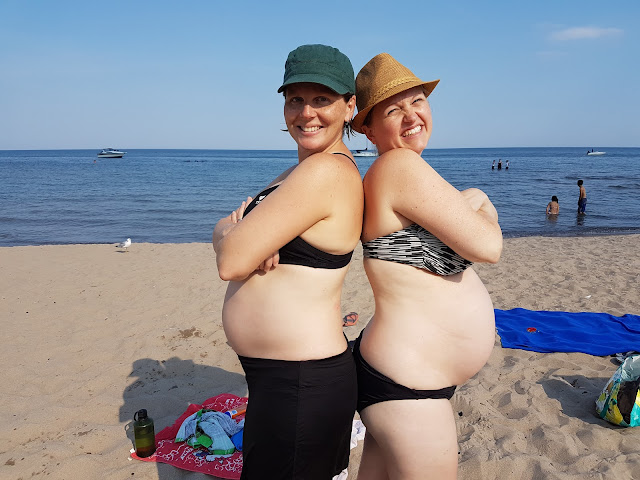 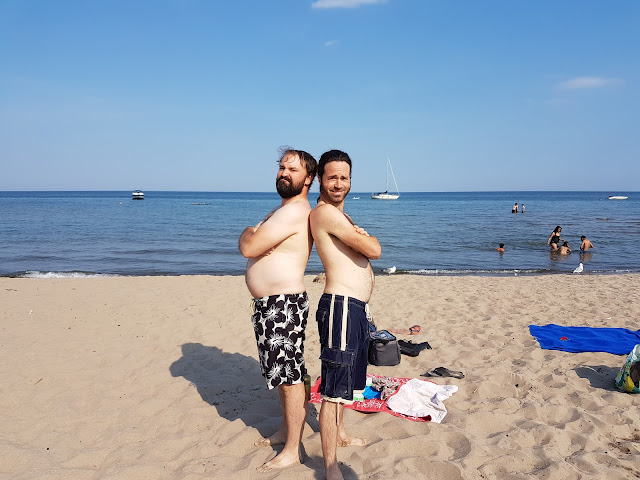 These pictures lead nicely into my next highlight bullet point...

I'm certain that after two weeks of travel and not having even finished unpacking yet I am forgetting things. Pregnancy brain is great that way, and so is travel brain. But this post is sufficiently long, I'm now up to 5 pees and a lunch break since I started writing, and I'm going to go ahead and call it finished. Week 35 was wonderful and filled with lots of fabulous things.
Here is the week 35 bump pic! Taken just today, I think it shows off how swollen and tired I feel after so many days in the car, but hey, that's pregnancy for you. See you next week! 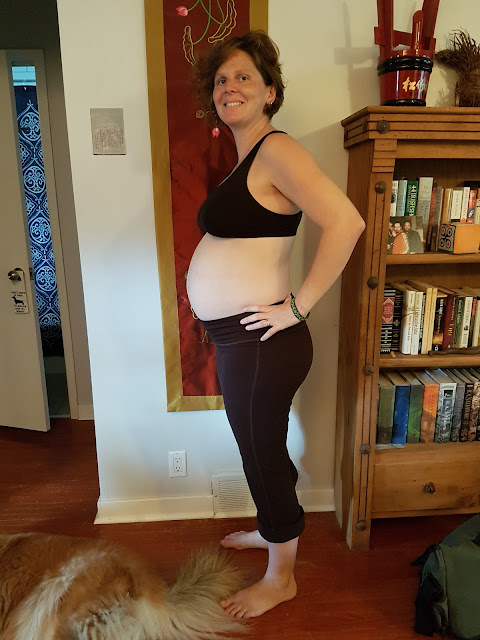 Virginia
Virginia is a full time writer currently residing in the southern arctic circle, ah... er... I mean Manitoba. The first story she remembers writing was about a dragon and her blanky-blanky. She was young enough that the entire thing is written in crayon. She hopes that her writing has improved somewhat since then, but she still has that story to use as a comparison when needed. When she's not writing she can be found dangling from rock faces, trudging through canyons with a fifty pound backpack, running through the wilderness with her dog, or engaging in other forms of outdoor relaxation.